Advertisement
“Thank you sir for the wonderful workshop you conducted for our students. We look forward to many more such programs from your side. Regards 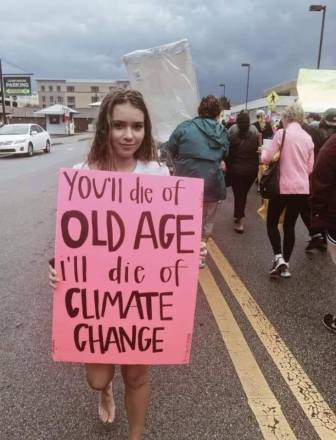 Further to the highly enthusiastic response to the workshop on “Global Climate Emergency: From Panic to Hope – Could the Climate Crises be a blessing in disguise” from the students and teachers of Salwan Public School in Mayur Vihar in Delhi, here is for your reference, help, and support to organise similar workshops in other leading schools for interested students and teachers – one each in South, West and North Delhi, Gurugram and Noida in next few days on Tues 21 May, Wed 22 May and Thurs 23 May – morning 9am to 10am and evening 3pm to 4pm sessions – ahead of the global strike for climate event on May 24 at India Gate in the morning from 7am to 10 am and in a chosen school in the evening from 4pm to 7pm which will be webcast live as shared in the note further below. This will be an All India event as we are asking other cities, towns, and villages to organize similar events in their location at same times on Friday, May 24. We are together hoping for at least 10 million children from all over India to participate on his day. 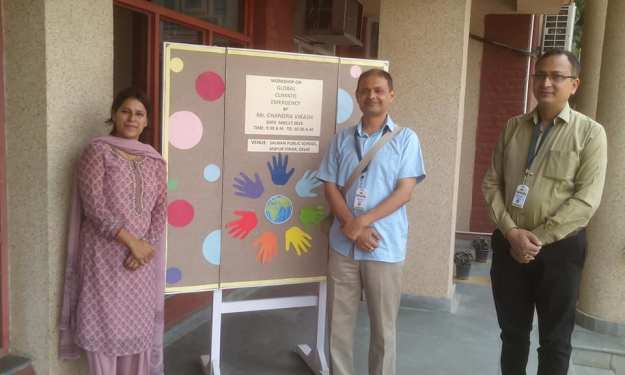 Our objective with these series of events culminating on Friday, May 24 is to bring as much pressure on the government through the schoolchildren as we should declare Climate Emergency in India and bring in special measures to drastically cut down on all kinds of air, water, land, noise, electromagnetic wave pollution as possible. Schoolchildren have been already successful to get the British Parliament, our former masters (though many argue that they still are) to declare Climate Emergency a fortnight back. As a country with long and rich traditions of living in harmony with Mother Nature and worship her various elements as Devata or Givers, we have everything to gain as this happens.

Workshop details and requirements are as follows:

You can find a copy of the presentation at SPS Mayur Vihar on Friday 17th May here.

Address to the students of Salwan Public School in Mayur Vihar on Climate Emergency – raising awareness and turning the crises into an opportunity for a new wave of community-centered ecological entrepreneurship.

With about 1500 schoolchildren, this is one of the most environmentally – responsive schools in Delhi NCR in thoughts and in action, that I have come across so far. The agenda for the workshop is as follows:

a. To raise awareness about the Global Climate Emergency.

b. Share and discuss adaptation and mitigation strategies needed in our lifestyle, in education, and in our profession to address this challenge.

c. Share career guidance for social and ecological research, innovation and entrepreneurship to turnaround this from crises to multiple opportunities to build a new future that is livable, equitable, sustainable and has attractions that children can aspire for, for healthy, happy and harmonious living.

In this session, I shall delve deeper into the historical backdrop of what led us to the brink of climate catastrophe – the elusive quest and pathological dependence on Diabolic Energy sources rather than on Metabolic Energy:

Climate Breakdown that affects us all, is a cancerous outgrowth of the colonialist excesses, that have only become deeper and more pervasive, though in covert ways, through the global banking system, the military arsenal to fiercely enforce it upon countries to fall in line and the moral authority derived from White Supremacism and “higher-grade status”, to contain the resentments and rebellion, Hubris Breakdown ought to be, therefore, an integral part of our Degrowth revolution.

I must also propose a working definition of who and what is indigenous given the fact that even the United Nations admits that it is a loosely defined term.

Indigenous, as we all born on Mother Earth are, simply means original inhabitants who practice the indigenous way of life.

They could be in forests, village or city (सप्तपुरी – seven ancient cities) but nevertheless, they lived in harmony with nature and primarily didn’t use minerals, mineral oil or coal except what appeared on the surface. Anything extracted forcefully from the womb of mother earth like a child suckling on the mother’s breasts but not gnawing at it or devouring her blood, organs and entrails, was called अमेध -that which destroys intellect or medha shakti.

That is the line that demarcates indigenous and non-indigenous people or societies, and not the color of their skin or where their forefathers came from.

Today, ironically, we are trapped into using petroleum or derived products bcoz our natural and indigenous sources of food, fuel, raw materials, etc from the forests, pastures and farms have been destroyed and continue to be looted and plundered. The indigenous system is called सुमेध that which enhances intellect or medha shakti and enables further human progress.

It is this ingenuity gap that through the popular mode of voting for political power merely on the strength of numbers is a sure-shot way to further perpetuate the popular errors. Instead, we need to pay attention to healthy investigation to diagnose the nature of the problems that have brought us to the brink of climate catastrophe, that children and youth around the world are rebelling against as inter-generational injustice.

The Degrowth Revolution for all practical purposes must dovetail into acknowledging the merits of the indigenous ways of life, that we ridiculed, undermined and destroyed as inferior, as a viable part of the overall solution, moving forward.

Nature is self-powered. Why do human civilizations need to be such creepy lame-ducks that need powering from external sources?

Having spent a good part of the past decade studying indigenous systems and structures, one of the defining criteria for indigenous and non-indigenous societies is the kind of energy they use. I classify them as Metabolic – plant, animal and human power that indigenous societies use and Diabolic – artificial external power from burning coal, petroleum, nu-killer, hydel and solar panels and windmills, except for a minimalist use where they are directly used as mechanical power without having to convert to electrical power and back to mechanical power. Grass blades, leaves, animal and human skin are excellent “natural” solar panels with unmatched efficiency compared to the artificial ones.

The hidden secret of these indigenous societies and which could be new frontiers for scientific progress, though this requires restoration of the natural eco-systems to their pristine glory are technologies such as self-illuminating gems that can store solar light during the day and emit by night, anti-gravity wheel-chariots and aircrafts using mercury distillation. They cannot, however, function in today’s noisy and polluted environments as the ingredients require a high degree of purity and high levels of meditation of the research scientists.

In this way, as the Hubris Breakdown is done with, we can look forward to further scientific and human progress without being deterred by the atavistic fears of having to return to pre-modern lifestyles.

We are now all set for the next Friday, May 24 big event for the #GlobalStrikeForClimate. The tentative plan is for a peaceful protest sitting in meditative silence in lakhs of numbers and let our handmade placards and banners do the talking. This will be from 7am to 10 am in the morning in groups or alone in and around India Gate. We shall request the authorities to cordon this area as Motor vehicles FreE Zone from 6am to 11am.

We will then have an online address by the organisers from 4pm to 7pm at in the evening at a School (to be notified soon) which will also be webcast live. Local organisers are advised to put up screens in the local park or public place where peoPle can gather to listen and ask questions. We shall announce the weblink and other details by Sunday evening.
About the Presenter:
Chandra Vikash (47) is a thinker, activist, and innovator. In his work
in various companies – SAIL, Arvind Mills, TCS, Mastek, Logica, Reva Electric Car Co, Erehwon Innovation Consulting and Vertebrand Brand Consulting –  and entrepreneurial ventures over the past 22 years, he has always valued and upheld social and environment responsibilities as symbiotic and synergistic to commercial success, persisting against several odds and deeply entrenched perceptions. His role in the Ganga movement has been widely acknowledged by media and civil society.
At present, he is Convenor of the Global Academy for Indigenous Activism (GAIA) which is working towards mentoring and nurturing 1000 social and ecological ventures in the next 12
months. Earlier, Vikash founded TEN Systems & Services in 2007, a company that develops smart and sustainable solutions in the areas of Transport, Energy and eNvironment and is recognized as a global expert in sustainable development with several international papers and talks around the world.
His wife Alka is a Hindustani classical singer and music teacher. They have two daughters Akarshita (15) and Parnika (10). He studied for his Bachelor in Technology from Indian Institute of Technology Kharagpur (1993) and MBA from Indian Institute of Management, Kolkata (1997).
Best Regards,
Chandra Vikash
B.Tech IIT Kharagpur MBA IIM Calcutta